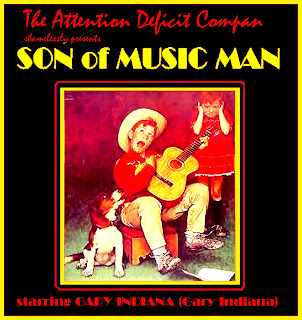 SON of MUSIC MAN
a comically tragic grand opera
Sung throughout, just like Phantom of the Opera (well, sort of).

ADD Tangent:  This concept might make a fun party game.  Go around the room, one line per person, creating a story with song lyrics.

CAST of CHARACTERS:
Gary Indiana (Gary Indiana) -- that obnoxious carrot-top kid from The Music Man, secret love-child of Robert Preston and Ethel Merman. Gary is now 25 years-old and sings every word that comes out of that obnoxious Hoosier-mouth of his. He should ask his doctor if Lyrica is right for him.
Annie Warbucks -- now 22 years old, no longer little nor an orphan, but still an obnoxious (yet lovable) redhead, who has the same lyrical disorder as Gary Indiana (Gary Indiana).
The Narrator -- equally obnoxious and, alas, stricken with a terminal  earworm, the entire contents of his brain having been displaced by song lyrics that won't go away until he reformats his hard-drive.  Rightly played by the playwright, of course, except when he's retching due to his own libretto, when MaryLou covers for him.

What Do You See, Cat?


Oh, what do you see, Cat?  It puzzles me so.
When you're just staring up at the wall.
You spotted a spider there, four years ago,
Although now I see nothing at all.

Perhaps you’re engrossed in some Zen meditation
And you’re comatose, deep in a trance.
But very few gurus have your concentration,
So it might be extremely small ants.

You started at seven when I first awoke,
And right now it’s quarter-past three.
Sometimes I suspect it’s a practical joke
That’s designed just to mystify me. 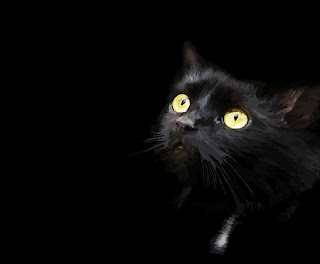