The MAN of La MAFIA
A 'Long-Running' (12 minutes) Musical by Dr Speedbump
With apologies to D. Wasserman, J. Darien, M. Lee and Cervantes

PRELUDE
The stage is bare. The narrator, thankfully, is not.
[This is a soliloquy by some guy who we think is Peter Coyote's brother, Don. He looks inexplicably like our hero, Don Bonano, and sounds just like Peter Coyote impersonating Rod Serling.]

May I set the stage? I shall impersonate a man. Come into my website and see him! His name, Rod Serling ... er, I mean Donaldo Bonano … a meek and gentle man who by some cruel quirk of fate was born into the Mafia (which doesn’t really exist, you know). As he comes of age, the impossible mission of this devote pacifist and certified Conscientious Objector is to sally forth into the world of organized crime and avoid conflict at all costs. Sadly, everyone in both Families, including Don Bonano himself, mistakes his peace-loving demeanor for cowardice.
[Orchestra now plays something heroic and Italian, like 'Fratelli d'Italia' (the wrong name for the Italian National Anthem, 'Inno di Mameli') -- or 'The Theme From Rocky' (the wrong name for 'Gonna Fly Now').]
No one recognizes the true courage needed for Don to deny his birthright and live a life of non-violence within the Bonano Crime Family. Uniamoci, amiamoci. Siam pronti alla morte. (Look it up; or ask your grandmother.) He has been dubbed ‘Don Yellow a la Banana’. We shall call him simply ‘Don Banana'.

SCENE 1 -- THE STRIP IN LAS VEGAS [Weren't you paying attention?]
[Note to Set Designer: a stupid, neon, animated 30-foot cowboy is mandatory -- or the audience might think we’re still in Atlantic City.]

DON BANANA: (singing to the tune of ‘I, Don Quixote’)

Hear me now, oh thou bleak
and most criminal world,
Thou art dark and as scary can be.
One young man,
with his blonde hair all prettily curled,
now hurls down his luncheon on thee.
[Cymbal crash and music suddenly gets louder and faster]
I’m no Don Corleone, though spawned by a mobster,
if danger should call I will hide.
[Unnecessary Note: Orchestra crescendo to fortissimo, which really goes without saying because they can’t help themselves anyway.]
The woodwinds and trombones
will blow me right over.
My liver is lilied inside.
Liver is lilied inside.
All through this story, I hide!

[Don and Pancho get into the black Cadillac station wagon and speed away as if being chased.]
[Note to Prop Department: This is an opportunity to go overboard with a totally superfluous full-size vehicle appearing on stage for all of 3 seconds, like in Grease and Miss Saigon.]

SCENE 2
The Boomer Room, a nostalgic nightclub at Mickey's Palace, one of the Gamblino's casinos (or is it 'casini' ?).

The room is full of mobsters with their girlfriends (while their wives are filming a reality-TV show, which later flops like Grandma's what's-its -- oh yeah, 'pancakes' -- because this is the '70s and the TV audience isn't yet sophisticated enough to appreciate reality shows.)

The entertainers in the Boomer Room are dressed as Mouseketeers.
[Yes, 'Mouseketeers', not 'Musketeers'. You're thinking of a suspiciously similar Broadway musical that appears to be a rip-off of this one. Those producers have an impossible dream, alright. Their show will surely fold in a week. Then I'll promptly sue the proverbial pantaloons off that pathetic, penny-pinching pair of pompous, pea-brained, purloining poachers to pilfer whatever paltry pecuniary proceeds their pitifully plagiarized play has perchance produced. Probably a pile of pennies! Please pray for this perennial pauper -- I'm a perpetually, painfully poor playwright and I'm profoundly peeved! Pfooee! ... ... ... But I digress.]

Sweet Lady ... fair virgin ... [He averts his eyes worshipfully]
I dare not gaze full on your freckled countenance, lest I be blinded by beauty ... so I'll stare at your boobs instead. But I implore you -- say your name, just once. I know it's not 'Doreen', although she had heaps of talent, too.

ANNETTE
[with a bouncy voice and a snappy salute]
Annette!

DON BANANA
My Lady! I will sing about you to the tune of 'Dulcinea', from a musical that's suspiciously similar to the one we're performing now. Maestro, please ...

I have seen you on TV
You are Annette Funicello
and for you I have lust in my heart.
As you out-grew your tee-
shirt, the breath of Don Yellow
would stop and this gasping would start.
Gulping air! Gulping Air!
I've got asthma and I'm always gulping air!
[He points at her tee-shirt.]
At your name I always stare
through fogged-up glasses.
Gulping air! Gulping air!

ANNETTE [sings slowly in response to Don B's poignant love song.]
Now it's time to say goodbye to all our company ...[She turns her back on Don and exits poco a poco, still singing the Rickey Rat ... er, I mean, the Mickey Mouse Club Farewell Theme.]

INTERMISSION
LETS KEEP THIS UNDER 5 MINUTES, SHALL WE?
Everybody wants to get out of here as soon as possible.
Sorry, Ladies ... no time to stand in line.
(see "At The Theatre" for some sympathy)
ACT II

SCENE 3
A 5-star federal prison resort in Scottsdale, AZ, where the guests ... &nbspI mean, inmates ... are trying to impress one another with their crime stories.

I'm not guilty, you know. I'm no criminal -- I don't even rip the tags off new pillows. I won a free cheeseburger at Burger Whop, and I reported it on my income tax! I was framed by an imposter. No, not the narrator -- although he is a phony. Wait! I'm the narrator, impersonating ... oh, you know. Gordon framed me ... I feel like a knight in rusty armor in a world without love. I don't want to see him again. He then begins this song, which is suspiciously reminiscent of 'Golden Helmet of Mambrino'. 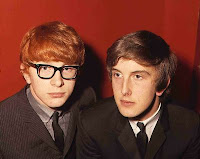 Gordon held up a casino
Up in Reno, not LV.
For his crime now,
I'm doing time, now,
in this penitentiary

DONOVAN [who was convicted of drug charges -- Surprise! -- back in the '60s. Now singing, more or less, to the tune of 'I can hear the cuckoo singing in the cuckooberry tree'.]

Oh, they call this fellow yellow
and they do so quite rightly

If that's really what got held up,
it pissed off The Family.

Gordon held up that casino
but Gamblino's after me...

SCENE 4 -- Back at Mickey's Palace

ANNETTE
[Now wearing not much more than her sequined mouse-ears and holding a peacock feather.] [Note to Costume Dept: For the matinee, a bikini is recommended, preferably with two monograms: 'Ann' and 'ette' -- or, if necessary, 'A' and 'F', depending on how much talent the actress has.]
Why do you do these stupid things?
DON BANANA
What things?
ANNETTE
These cowardly ... the things you do.
DON BANANA
I hope to add some measure of grace to the world of organized crime.
ANNETTE
You're going to take such a beating.
DON BANANA
Whether I'm respected or not doesn't matter.
[awkward silence]
You're hot, Annette, but no one ever accused you of being bright.
You're supposed to say "What does?" so that I can respond,
"Only that I follow the quest and avoid conflicts at all costs."
ANNETTE
[spits loudly, into her microphone, or over the orchestra pit into the audience]
That for your quest!
[turns, marches away, stops, turns back -- while the music plays:
BUMP! Bump, Bump, Bump!]

CHORUS
Come along and sing a song and join The Family ...

ANNETTE
What does that mean ... 'quest'?

DON BANANA
[Note: If you don't know the tune of this one, I'm surprised you made it this far. Don't you have something better to do?]
It is the mission of each true Conscientious Objector... No, his privilege! ...

To scream, the awesomest scream,
To hide, from the smallest of foes,
To leave, with the ten grand I 'borrowed',
To run, like the other C-Os.

I might - have the most awful song
to sing, as I'm chased long and far.
And my friend has his head out the window,
to retch on my beautiful car.

This is my quest,
to flee like Johnny Guitar,
no matter how hopeless --
We'll be feathered and tarred.

Too frightened to fight,
I bet there are laws
for protecting the timid and meek,
who keep shitting their drawers.

And I know, if I'll only be true
To this glorious Quest,
That my heart, will be spotless and pure,
[slower, pulsed]
when it's torn from my chest.

[Note to Prop Dept: Save the turkey giblets for the Epilogue -- to hold off the PETA-people until the end of the play. They are already complaining about Annette's peacock feather and phony mouse ears. If they rush the stage, lure them away with bananas.]

[Pancho is still retching -- and now Annette and some of the musicians are, too. God help what's left of the audience. When the retching subsides, Don Banana finishes his song with this anti-climactic verse.]

The mob world -- will not ever forgive
that I ran, and then jumped in my car
And drove, not as fast as the others,
who I stuck with the tab at the bar.

I never did trust that bitch!
An Italian girl with freckles!
Ha!

FADE TO BLACK
'Funiculì, funiculà' like a funeral dirge, largo con fuego (a slow burn).]
FINE
PHOTO CREDITS: " The Strip", by V. J. Lucid 1991; all others on loan, courtesy of somebody or other.