SO YOU CAN STOP SCROLLING.

YOU ARE WELCOME TO PERUSE MY OLD BLOG POSTS,
BUT YOU PROBABLY HAVE MORE IMPORTANT THINGS TO DO.
DON'T YOU!

I have a some alternatives for fiscally conservative Republicans to consider rather than spending $15 billion to build a wall along the Mexican border. I have saved the best for last.
(1) Why not plant a cactus fence along the border, like in the picture below? 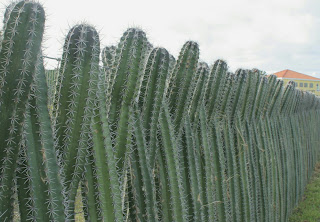 (2) Construction workers in Mexico learn about a $1.40 an hour, compared to $32 per hour for union construction workers in the US. Assuming that half of the total cost is materials, virtually all of the labor cost could be eliminated by hiring Mexican workers to build the wall.
(3)You can save even more by building  the wall near the border between Mexico and Guatemala -- where it's only about 150 miles from sea to sea. Mexico might even be willing to pay for that alternative to keep the Guatemalans out.

(4) Better yet ... an estimated 720,000 illegal immigrants enter the US annually across the Mexican border --  and about half of them get caught. These 360,000 could be detained in labor camps and paid 10¢/hour to construct the wall.
(5) Even better still, let's pay them to not build the wall, but we'll tell tRump that they are working hard.

(6) Lay off all the Border Control Agents and put a $1,000/head bounty on the illegal immigrants. Then let the vigilantes solve the problem. This would reduce the annual cost to $7,200,000. The program could be terminated when tRump leaves office.

(7) My personal favorite is to build a 3-inch high wall out of Legos in the eastbound breakdown lanes of Interstate Highways I-8 and I-10, as a diversion, and scatter loose Legos along it -- with signs in Spanish saying "Please remove shoes before entering the USA". 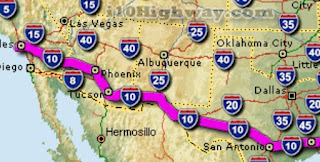