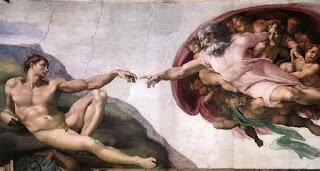 The Good Book says God created Man in His own image and likeness.
Man returned the favor -- and Michelangelo notarized it
by creating a corporeal image of the Creator, as well as for Adam.
Scripture is still assumed to refer to bodies rather than souls.

Life then imitated Art; and millions more made the same wrong turn.
Man's imagination tends to be limited by his senses.
Even a genius, in the role of artist, has this limitation. Besides,
the fussy old pope probably demanded a picture he could see.

God is a whole lot bigger than our little brains can imagine.
The Universe, His creation, is not merely what it appears to be.
Neither are we. There is much we don't know about ourselves.
Of that we can be certain, humbly confident of our ignorance.